The U.S. has fifty nifty United States (please tell me you know that song). Mainland France is divided into 12 regions, and further divided into 97 departments.

I knew that they existed before, but I've learned a lot more about them this year. Having a French husband (even though he isn't a huge fan of his French-ness) can be useful.

France didn't used to be as big as it is today. Several of the regions were historically their own countries (before France absorbed them) and have their own history, dialects, and cultures. Our region is called PACA (which is fun to say!). It stands for Provence-Alpes-Côte d'Azur.

Example of culture within an individual region: Brittany/Bretagne. They have the best hats. And the craziest-looking dialect. 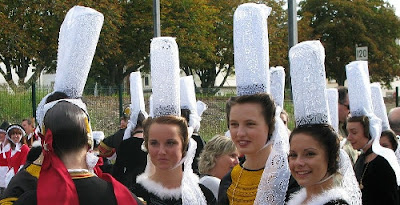 Unlike U.S. states, French regions can't make their own laws and aren't nearly as independent. I've heard from lots of French people (they aren't afraid to tell you their opinions about the U.S. government, let me tell you) that our system sounds chaotic to them. France is very centralized. It's all about Paris. Paris has all the power.

This weekend we road tripped through 3 departments I'd never been to before, which inspired me to waste my time making this map of where I've been in France. 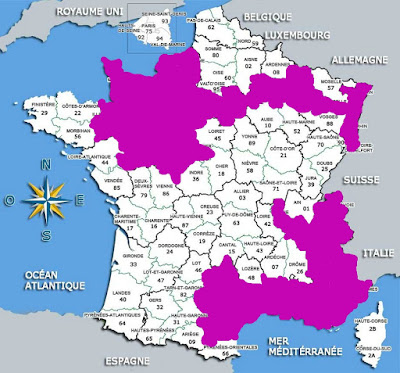 Notice how I haven't been to the middle? Let's just call those the "flyover departments." There's not many touristy things to see there. I actually don't mind when people call Wisconsin a flyover state. I know it's not a tourist destination, but that doesn't mean it's not a great place to live with the happiest cows in the land (suck it California).

Who knows if I would ever have a reason to make it to central France. I have technically driven from Paris to Lyon, and taken the train several times from Paris to the Riviera and back. But I don't count that. I wouldn't mind seeing southwestern France someday, or maybe the very north of France like Lille.

The departments are numbered alphabetically (Ain is 01, Aisne is 02, etc.). We live in the 06, Alpes-Maritimes. The department numbers are used for zip codes and license plates. It also facilitates French people judging each other in ways like "Oh la la, they're from 13. No wonder they drive like a crazy person."

Here's what a license plate looks like from our department. It's also fun to see what E.U. countries people are from. I bet you can guess the F stands for France. 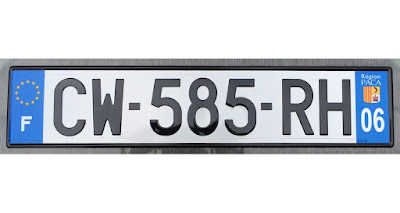 This was such a lightbulb moment for me! Everything makes so much sense now. The first 2 numbers of zip codes are the department, and the last 3 correspond to your local post office. I don't know if that's interesting to any other human besides me, but there you go. Maybe you learned a little bit about France :)