Down south for the weekend

It had been TWO YEARS since I'd seen one of my favorite friends Stephanie Jones, so I had to make this happen. She's coming to my wedding in two months (and she's a bridesmaid!), but since I know I'll be super busy, I needed some Stephanie time beforehand.


She lives fairly close to Nashville in the Murfreesboro area. Actually, her address is in a little town called Bell Buckle. It's my new favorite hobby to pronounce 'Bell Buckle, Tinnessee' with a very unrealistic and exaggerated southern accent.

I thought I was flying to TN on Friday and flying home on Monday. After packing everything, getting up early to catch my flight, and starting the drive to O'Hare, I realized that my flight was actually the next day, Saturday. Who does that???? So it ended up being the world's shortest trip. I think my brain is broken. Send help.

When I did finally arrive, we started out the weekend shopping. Because obviously. Then we made it to her house and met up with her husband and 2 little boys. I can't believe I have a friend who has a house and 2 children. #27andgettingold


We pretty much spent the whole weekend talking. It was fun to reminisce about our first few years at BYU (we lived together for the first 3), make fun of the strange people we used to know, and also compare some teaching stories (she teaches middle school science). I could talk to Stephanie about any subject and it probably wouldn't even be weird.

There were 2 problems with my trip (besides it being a day shorter than I meant it to be)- we forgot to take a picture together, and we forgot to choreograph a dance together. That's kind of our tradition that began when we were super sophisticated 18 year olds who still had Spice Girls songs on their Itunes.

I won't post a video of one of our past dances, because only very privileged people are allowed to see those. I will, however, take a walk down memory lane with some pictures. These are probably better than pictures we would have taken last weekend, because it was horribly humid and my makeup kept melting off my face and my hair was doing scary things. 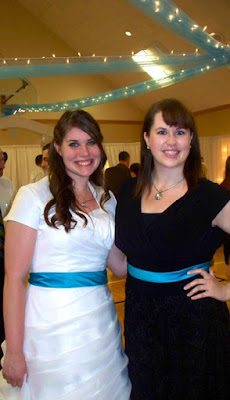 This was 2011- I can't believe it was 5 years ago!! She got married in the Salt Lake temple, and then me and the whole family road tripped to the Tennessee reception.

I'm sure there will be more Tennessee trips in my future. It was so great to catch up with this girl. Our friendship can always pick up where it left off.

I decided that flying to hang out with friends was a much better method than complaining that I have no friends left in Wisconsin. A few weeks ago I had some Olimpia time, and now I had my Stephanie time. And in less than 2 weeks, it will finally be David time! I'll be flying into Nice for a week and a half of Riviera sun and and swimming in the Mediterranean. My boring summer of no friends and no fiancé is looking up.

Email ThisBlogThis!Share to TwitterShare to FacebookShare to Pinterest
Labels: America

In my mind, the word 'vacation' usually evokes either exotic palm trees and relaxing beaches or interesting new cities to explore. It's hard for me to think of what I was doing last week as a vacation, but I guess technically it was.

I attended the Houdek family reunion in Middle of Nowhere, Idaho and then spent a few extra days in Utah to hang out with one of my best friends and avoid driving through Nebraska with the rest of my family.

We flew into Salt Lake because Middle of Nowhere, Idaho of course has no airport. It's such a bizarre déjà vu feeling to be back where I spent my 5 college years. There's something about the mountains, the dry, hot air, the stressful traffic, and seeing so many Mormons that brings back the most random memories (good and bad) that I thought my brain forgot about a long time ago.

The 2 highlights of our first day in Salt Lake was meeting my ADORABLE newest cousin Henry, and being reunited with my love Ollie (Jenna's puppy). Henry was born in December and I haven't seen Ollie since December, so it was a long and highly anticipated wait on both accounts. <3 them so much

The next morning we started the drive up north away from civilization. Along the way we stopped in Idaho Falls and Rexburg, both of which I've never seen. Here's a glimpse of the Idaho Falls temple, and what I assume are THE falls of Idaho Falls. We drove around the BYU-Idaho campus in Rexburg. My assessment: it really looks like a mini-BYU just minus the mountains and with the addition of close-by farmland and several preachy signs with rules. 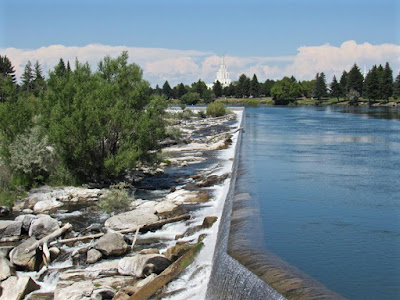 Middle of Nowhere, Idaho is in reality named Island Park, Idaho (population: approx. 200). With all of the Houdeks that were able attend, about 20 of us all stayed in one big log cabin house. Besides spending time with the extended family, which of course was the point of the reunion, the highlight was spending 2 days visiting Yellowstone.


I don't really hide that I'm the opposite of a nature person, but even I can admit it was pretty cool. I'll let the pictures speak for themselves. I bought a new camera right before the trip and enjoyed testing it out. 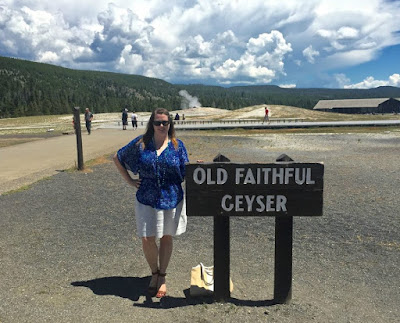 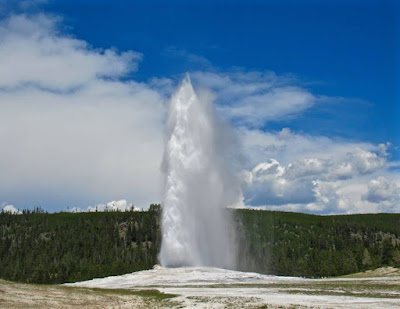 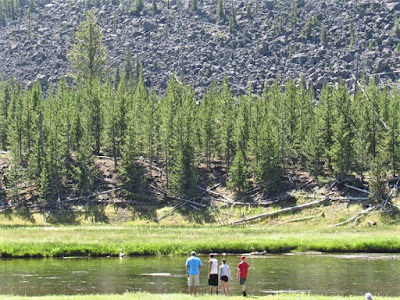 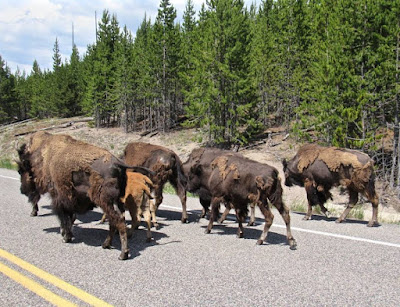 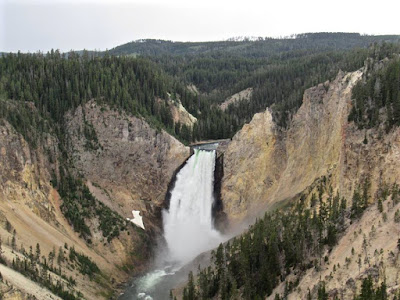 My favorite thing to see was probably the Grand Prismatic Spring. It was such a weird feeling to be there because that day the temperature dropped to barely 50 degrees with cold wind (especially when you're dressed for hot summer weather). So you had the cold wind hitting you and then you'd walk through a cloud of steam and warm up. And then the steam would go away and you'd be shivering while seeing these crazy colors. 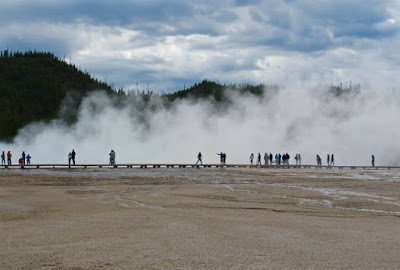 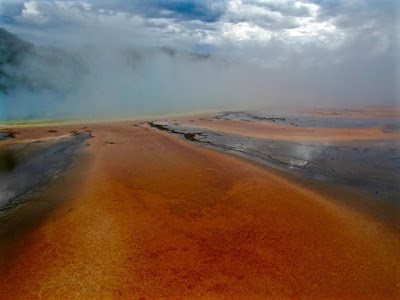 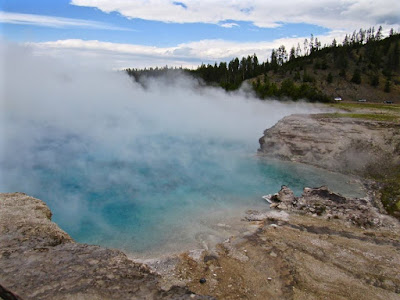 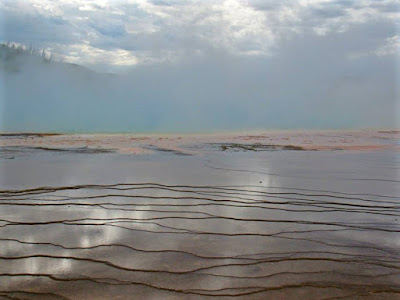 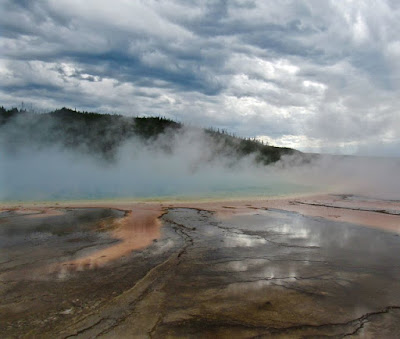 I saw at least 4-5 lost hats that were casualties of the wind. 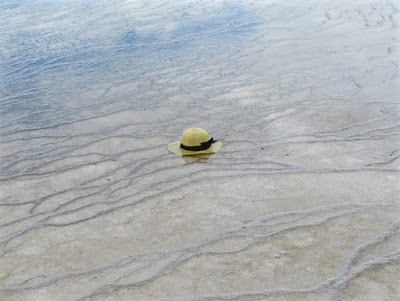 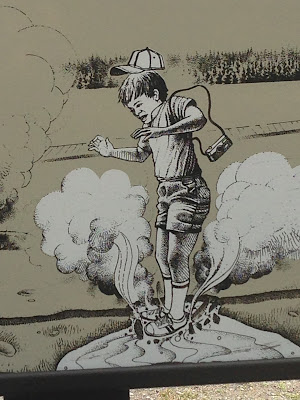 Anyways, it was nice to spend time with my extended family and visit Yellowstone again. We can't even remember when we went there last- my best guess is that I was about 9.


I was a little nostalgic (and maybe in a bad mood at times) about how it would have been more fun if David had been able to come... considering that my sister had her husband to hang out with and my cousins are all quite a bit younger than me... but he's been trapped in France since the beginning of June. (This is the point where the sad violin music plays and everyone feels bad for me ;)

On the way back to Utah we drove through Logan, another exotic Western metropolis that we hadn't seen before. The temple was pretty, and we walked around the Utah State campus. Or in other words, the campus that thinks their BYU's rival but no one at BYU really cares about that "rivalry." But really, I thought Logan looked like a decent city that wasn't overbuilt like the Provo area. 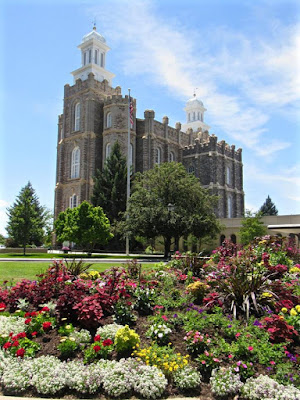 The next day, my parents and Jenna and Cabren (and don't forget the dogs Ollie and Midas) started the long trek home to Wisconsin. We're all happy that they decided to move home! My parents helped them make the tedious 25 hour drive through the flattest and most visually unappealing state in the union, Nebraska (and don't forget the beautiful Wyoming and Iowa). I opted to get out of that and fly home a few days later instead. I bet you can't imagine why, right?

Trust me, I've made that drive enough times to last several lifetimes.

It was so good for the soul to hang out with my former BYU French House roommate and European travel buddy Olimpia while in Utah. We went through so much together: surviving French culture, Paul, traveling in random countries where we don't speak the language... 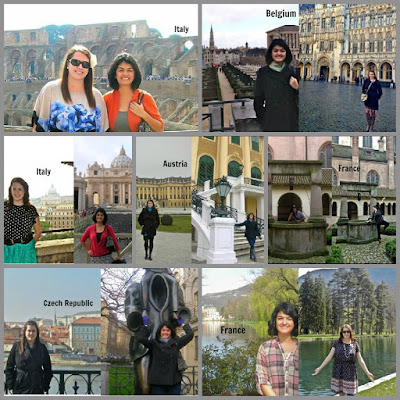 We had the time of our lives living together in Provo (our whole apartment was amazing- I've never laughed so much in my life) and then traveling together to something like 6 countries during 2013-2014. She had the brilliant idea to commemorate our trips with an Italian dinner, a French movie (both of which we also got to do with another great former roommate- Bethany!), Czech pastries for breakfast, Belgian waffles for dinner, and Austrian candy for dessert. #health

I was full for 2 days afterwards (oh and I forgot to mention the Cocoa Bean and Jamba Juice we also enjoyed), but it was so worth it! 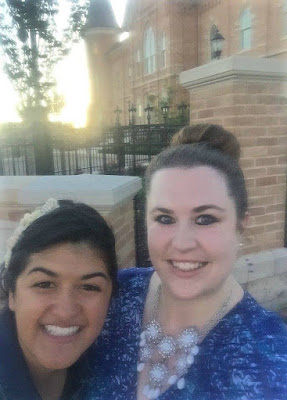 Luckily, my flight was cancelled in a place where I have family members to take me in. I stayed with my grandparents for another night. Before attempt #2 to fly home, they were nice to entertain me and sightsee around Temple Square despite the 100 degree weather. 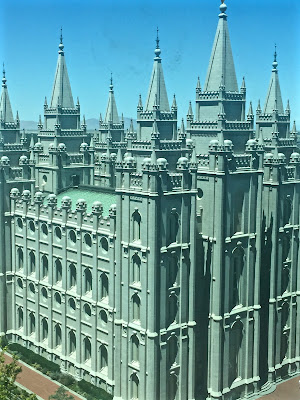 As you might have guessed, the next day I made it back to good old Wisconsin. The end.

(I almost made it through this whole post without mentioning my favorite historical fact: Ernest Hemingway, after living for years in Paris, killed himself when he moved to Idaho. Oops, sorry. I didn't quite make it. And I was trying so hard to be positive about Idaho.)