The Israel not seen on the news

Israel is on the news a lot, and I don't think it's EVER on the news for a positive reason. Of course Israel has its problems, but it's got a lot of good things going for it too. I feel safe living here, and I wouldn't mind living here for a lot longer if I had family close-by.

On that note, I thought I'd write a little bit about why I like living in Israel. I fell in love with this country during my BYU Jerusalem days... and that love is still going strong. And not just because of the falafel and the rugelach.

Because it's fun to walk down the street and see all kinds of different people. Among Israeli Jews, about half are of European origins and half are Middle Eastern. Among the Arabs, there are Muslims, Christians, Druze, and Bedouins. Some Jews and some Arabs are fundamentalist-level religious, and some are completely secular. There is a whole melting pot of cultures here. And sometimes they even get along!

Every day on the streets I hear Hebrew and Arabic, but also usually Russian and English... and sometimes even French. I like observing how different people dress (see Jerusalem Fashion). It's always interesting, and it's fun to be one of the only Christians because I get to learn a lot about different types of people. In the University of Haifa's International School, you get to meet people from all over the world. Last year, me and my roommates were from 4 different continents.* 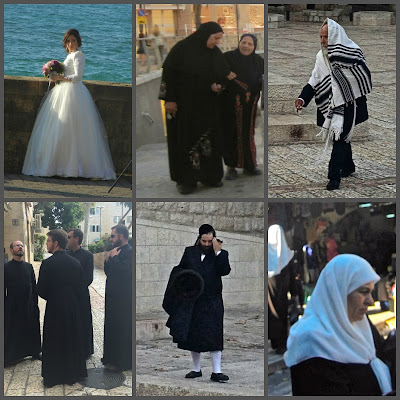 This goes along with the culture. I wonder if anyone has more holidays than Jews. There are way more than Hannukah and Passover, the two that Americans have heard of. Off the top of my head, there's also Rosh Hashana, Yom Kippur, Sukkot, Simchat Torah, Tu B'Shvat, Purim, Shavuot, Tisha B'Av ...not to mention the Israeli holidays (memorial day, independence day, Holocaust remembrance day)... and not to mention the Arab holidays on top of that. And Shabbat every weekend.

Last March, I was with my parents in Jerusalem during Purim. Theoretically, Purim celebrates the Esther story... but in reality it seemed more like a fun party holiday like Halloween or Carneval. Either way, it was a really fun time to walk around in Jerusalem! I never thought I'd see so many ultra-Orthodox Jews stumbling drunk through the Old City, or that I would enjoy it so much. 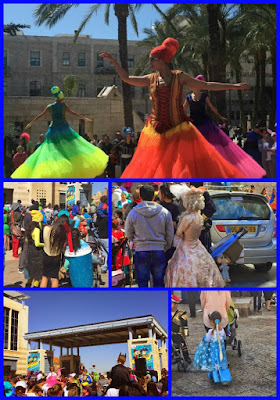 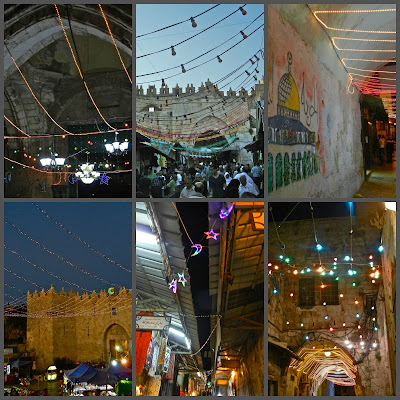 It makes me feel a little sad about our lack of holidays. Although on the bright side, it's convenient that our country doesn't shut down this many times a year. On that side of things, point for America.

Before I ever left America, I thought things from 1900 were old. After being in Europe, things from 1500 were old. After being in Israel, things aren't old unless they're from the B.C. years. In Jericho I saw a tower that was built in 9,000 B.C.!!! There are archeological, religious, and historical sites all over this place. It would probably be impossible to come here without seeing at least one (it's a small country, guys).

My personal favorites are the Christian sites in Galilee, the beautiful old churches in Jerusalem (shout out to the Holy Sepulchre), and the Old City walls. Then there's the Temple Mount, Masada, the Crusader fortress in Akko... the list could go on and on. If you like history (especially religious history), then Israel is the place for you. 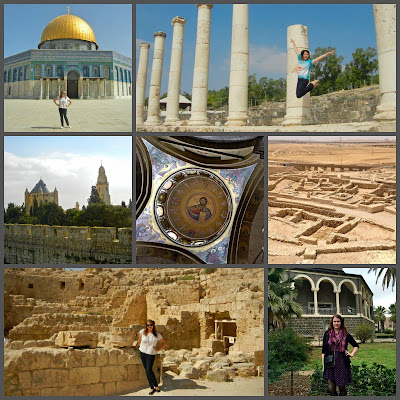 4. The modern amenities. (I've been watching House Hunters a lot... definitely where that phrase came from)

You wouldn't think a country that's full of ancient history and is in the middle of the Middle East would be modern... but it is. If you know me, you know that I couldn't even survive 5 days in a cabin at Girl's Camp (too up close and personal with nature).* So I don't think living in a 3rd World country would be for me. I'm too high maintenance. It would be very hard to live somewhere where you couldn't drink the water and trust the sanitation. And there's noooooo way I could live in a country without any air-conditioning.

Thankfully, Israel is pretty much as modern as the U.S. or Western Europe. Another thing that's impressive is how educated Israelis are. I would also say they have the best English out of any country I've been to (with the exception of maybe Switzerland).

Before I came here, I thought the entire country looked like this. One big desert. 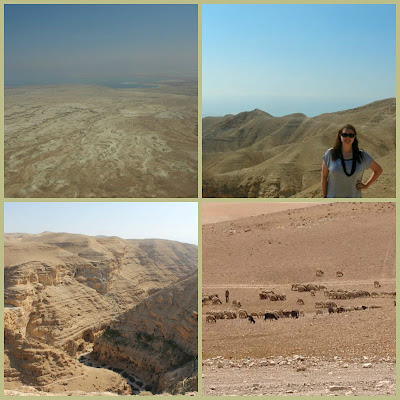 Parts of it do, but other parts look like this. 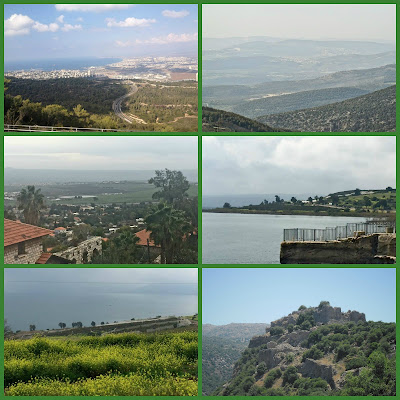 Especially in the winter, you can definitely find green in Israel. For such a small country, there's a wide variety of nature. My favorite part are the lovely Mediterranean beaches and Mediterranean views that we have here in Haifa.

Usually I prefer a 4 season climate, but I have to admit the weather in Israel is pretty close to perfect. When you walk everywhere and want to be outside traveling and sightseeing, then Israeli weather is ideal.

It does get a little too hot in summer (probably around Utah temperatures), but fall, winter, and spring temperatures are amazing. Also, it's sunny with bright blue skies 99.9.% of the time. I can't say it's sunny 100% of the time because today it rained. However, overall I've spent about a year living here and I can count on one hand the number of times it's rained.

Besides the things listed above, I've also found the people to be much more welcoming and helpful than in that other foreign country I've lived in. I don't know if France is the best country to measure other ones up against in that department (they set the bar pretty low haha), but still. I've never felt the need to be on the defensive about ridiculous American stereotypes here (like I had to in France... see here).* So that's nice.

Other than things being closed a lot and the stray cat problem (yeah, they have one of those, see picture below of a stray cat hanging out while we took a Hebrew placement exam)... and the imminent threat of war (mostly kidding, although obviously it's not as stable here as in little Germantown), this is a pretty awesome country. 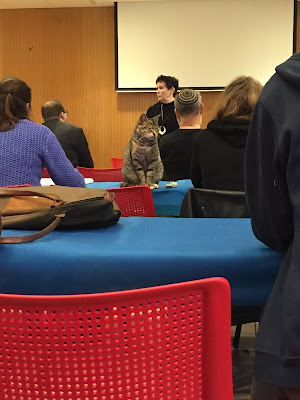 I'm happy that I got to come back after BYU Jerusalem and experience more of it. I'll be sad when I have to leave Israel for good, although also happy that I get to stop taking that awful 13 hour flight.

So who did I convince to come visit me now?  ;)

* The night that our French exchange student arrived, I remember vividly what 15 year old Marissa was thinking. I had never met a person from another country, and in my head I was freaking out with excitement that SOMEONE NOT FROM AMERICA was in my house. Look how far I've come since then.

* I came home after one day. True story.

* Disclaimer: I still love my France.

Email ThisBlogThis!Share to TwitterShare to FacebookShare to Pinterest
Labels: Israel

It’s that time of the year again... time to head back to Israel! I had a pretty short break at home, just over a month, and it predictably went by super fast.

I managed to sneak in two little trips during that time to two very exotic locations- Utah and Kansas. Out in Utah I got to spend time with friends and family. It was so fun to catch up with everyone! 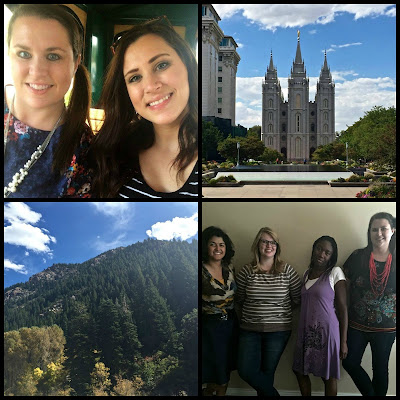 Last weekend me and David went on a short road trip to Kansas City. I’m trying to help him out in his quest to see all of America. I’m a little sad that after this trip we’ve officially been to more states than countries together. I think our official count is now at 5 countries and 6 states. So close.

In Kansas we stayed with my aunt and uncle (thanks guys!). We toured some of the church history sites in Missouri that aren’t too far away, and David met his new best friend, Kansas City barbecue sauce. On the way home we made a quick stop in St. Louis. 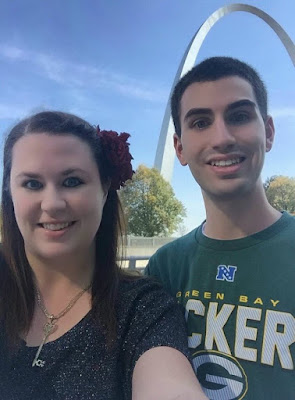 Other than those little trips, I spent time with my family and puppy and enjoyed fall. I spent a lot of time doing homework too, but we don’t have to discuss that. Other highlights included doing ballet for the first time since first hurting my knee a year ago (I can still dance! just not that well haha), and spending a day in downtown Chicago. 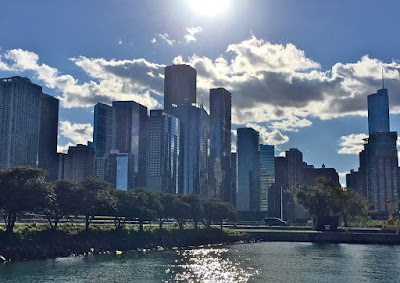 Israel in October is still in the mid-80s... so I had to soak up as much beautiful fall weather and as many American fall activities as possible. It’s my favorite season, so I’m happy I got to have a month of it before going back to summer. By the way, summer is definitely NOT my favorite season. 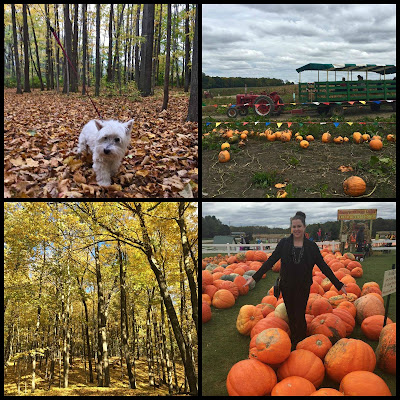 Last year I made an Israeli flag pumpkin in honor of leaving for Israel a few days later (weird that it was a year ago that I started my program!), so this year I felt like it was only fair that my pumpkin represent my other adopted country- France. It makes no sense since Halloween is not really a thing in either of those countries... but why not. 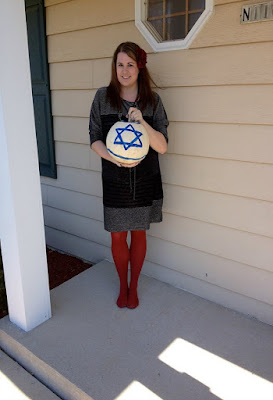 Unfortunately, my France pumpkin died less than 2 weeks later. Sometimes the good ones die young, right? I have to give credit to my my dad for first joking that my pumpkin surrendered... but then I just had to take it one step further. 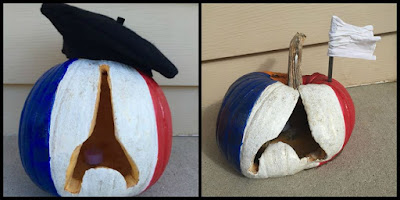 Anyways, this week I’ll be starting my third and last semester in Haifa. I’ll be done for good at the end of January. Well, done with classes. I’ll still be working on papers for months after that. I'm just going to focus on the being done with classes part.

I'm ready to enjoy my last 3 months of living in Israel! I think it will go by fast.
Posted by Marissa No comments: