The rough Hebrew translation of Etzli is 'at my house'. I thought to do this because I did something similar about my Strasbourg apartment. It's fun to compare and contrast.

I've been here for 3 weeks now, and I'm finally pretty much settled in. I can now call the lovely city of Haifa 'home'  :) 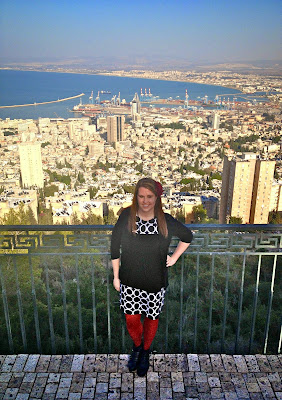 This was the view from where we had a training meeting on volunteering with Holocaust survivors (more on that later!).

P.S. That is the first picture of me in Israel with my knees showing (when I am not at the beach). Yay for freedom, fashion, and no more BYU Jerusalem rules haha.

Now you get a tour of campus and the dorms! Lucky you.

Here's the outside of my building. 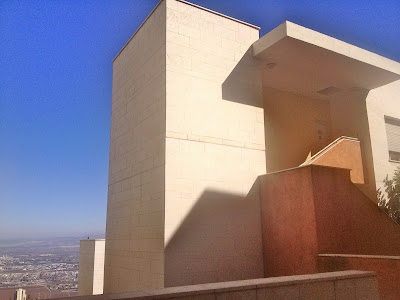 When I first arrived at the dorms and saw my room it was pretty depressing. They're fairly old and crappy. There were stickers (mostly of Barbies and smiley faces) all over my walls. Even on the toilet, there was a huge Barbie sticker. I feel like even as a 6 year old I would have had better taste than that, but what can you do.

Thankfully, I brought some cute decorations from home (Hobby Lobby!). They conveniently cover up most of the sticker residue, holes, and other ugly things on the walls. 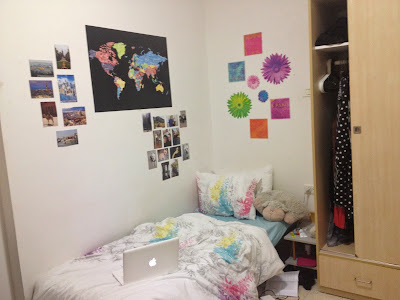 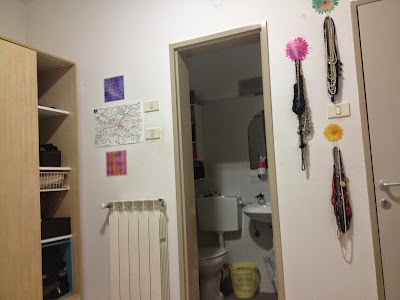 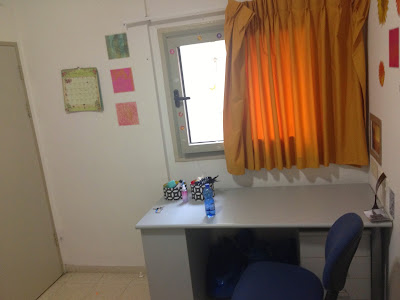 The only thing that's still KILLING me is that hideous curtain. I'm on the lookout for something better.

As you can see, I have my own room with a connected bathroom... which is nice!

Then there's a shared living room and kitchen area. Here's a picture of that, plus the courtyard- which reminds me of the ones at the BYU JC. 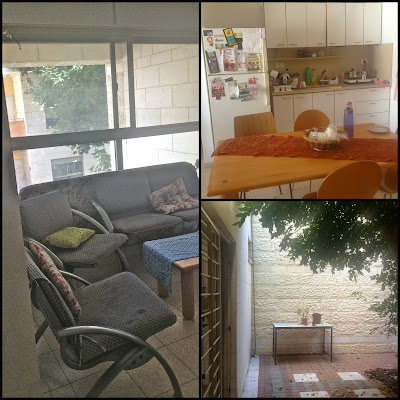 I have 4 roommates from 4 different continents. There's another American, a German, a South African, and an Israeli. I seem to have gotten pretty lucky with the roommates! Trust me, I've had some weird ones... so I know when people seem cool and normal :)

And now for some pictures of campus! This is the building where all of my classes are held: 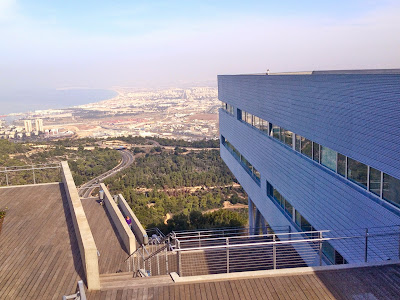 It's pretty nice to step out on that balcony during breaks from class.

Here's the view leaving the dorms area and starting to walk to campus. The big tower in the distance is a campus building. It reminds me of the SWKT because they're both ugly. They were probably built in the same era. 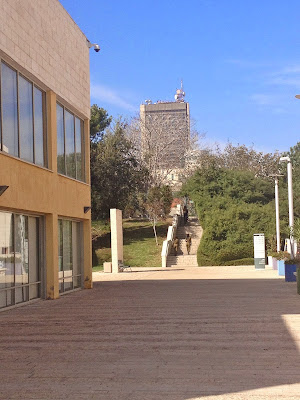 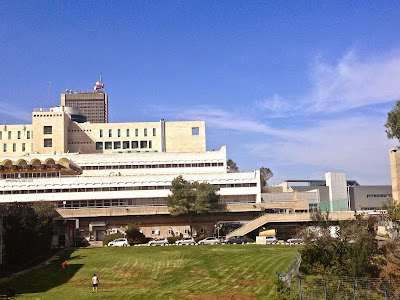 And lastly, the area in front of the main building where you can hang out on the fake grass. 'Greg' is a little cafe. 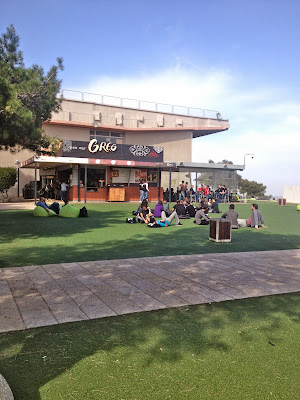 So that's the University of Haifa!

I never posted this on facebook, but if you enjoy reading about awkward moments read this.

Awkward moments are a part of life when you live in a foreign country. At some point, you will inevitably be completely clueless and not understand what's going on. I can't count the number of times I felt awkward in France. Awkward moments ranged from just feeling a little silly to the scarring moment when the mean lady who worked at the train station might have made me cry in public. It was a high-stress situation. Which I'm now reliving haha.

Anyways, I felt hopelessly awkward the other day, so I thought I would share. The story had a happy ending, so it's not too painful :)

As a part of my program, you're supposed to take either German or Yiddish. I was already taking German, but decided that I also wanted to try the Yiddish class. I love languages, so why not, right? I've already studied one Jewish language, so why not try out the other one.

All of my classes are with the same group of people. Not everyone is taking every class, but we only have classes with that same group. Also, every class is taught in English.

So I get to the Yiddish class, and I don't recognize anyone. Finally, I recognized one person from my program who I asked if it was the right class and I felt a little better. But not for long...

There were about 30 people in the class, and they were ALL Israeli. Then the professor comes in and is only speaking Hebrew.

This can't be the right class.
Oh no.
What are they saying.
Please no one talk to me.
How can I leave.
Why did I sit in the back corner.
I can't escape!

That morning, I'd had an interview for an internship. Just as the class was starting, the lady who'd interviewed me walked in and sat down next to me. So that would have made it even more embarrassing to stand up and leave. I wasn't anonymous anymore.

So the class starts, and they're correcting the homework from last week. I had missed the first class. I'm just praying that I do not get called on, because I have no idea what they're talking about in Hebrew or Yiddish.

Thankfully, as they're correcting the homework... the professor paused and asked if everyone in the class spoke Hebrew, because he noticed there were some new people in the class. He was looking right at me because I had a scared look on my face haha.

So I had to admit that I only spoke some Hebrew. After that, the professor would also translate some things into English. And EVERY single time he spoke English, all 30 people in the class would turn around and look at me.

Awkward American, party of one.

I found out later that the class was actually supposed to be in English, but then it turned out that everyone taking it was Israeli so they changed it.

As the class went on, I actually started to understand most of it. I can understand a fair amount of Hebrew, so when I stopped freaking out and some things were in English it was all fine. I already tried the homework and I can do it easily. So crisis averted.

I don't know why this situation was so scary, but it was. However, I'm happy I didn't run away and try to sneak out of the class because I'm still excited that I get to learn Yiddish. I know that probably doesn't sound fun to most people, but I am clearly not most people. :)

p.s. In case you're wondering, Yiddish looks like this. It uses the Hebrew alphabet. I chose this picture because that big word is one of the handful that I've already learned. It means today! 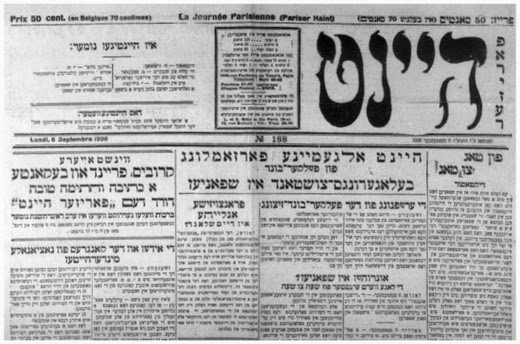