Roman Holiday: a castle, a mass, and a basilica (and gelato).

Our original plan for Sunday was to go to an art museum, the Galleria Borghese. However, it turns out that you have to book your tickets further in advance than the night before, because they were all sold out when we tried to buy them.

Our back-up plan was Castel Sant'Angelo, which I'll admit I had only heard of because of the book Angels and Demons.

The walk there from the closest metro stop was, I must say, pretty picturesque. 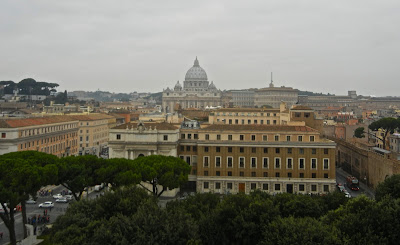 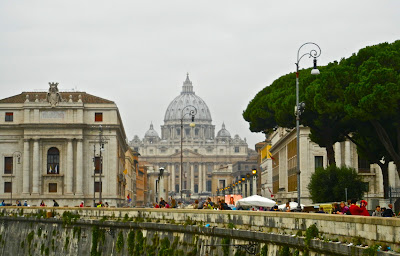 Castel Sant'Angelo was built (in the 100s, nbd) by the emperor Hadrian to be his tomb. It eventually became a Vatican fortress. There's a tunnel underneath it that goes to St. Peter's Basilica, and once when Rome was invaded, the Pope was able to escape using it. 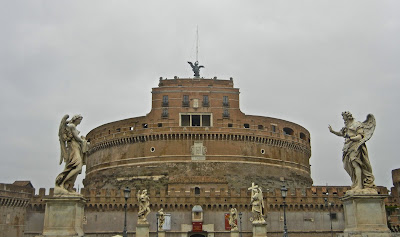 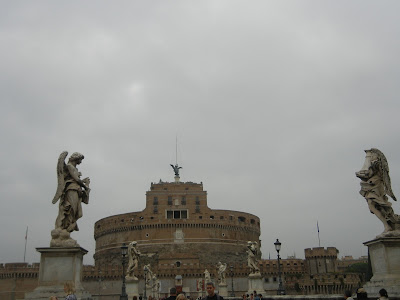 We spent most of our time there walking all the way around the balcony that circles the tower. Some things we saw inside were a little art gallery and a fancy library, but by far the best part of coming here were the views of Rome from the balcony. 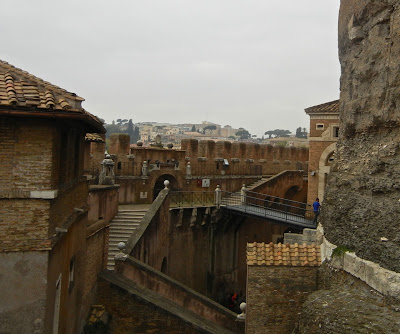 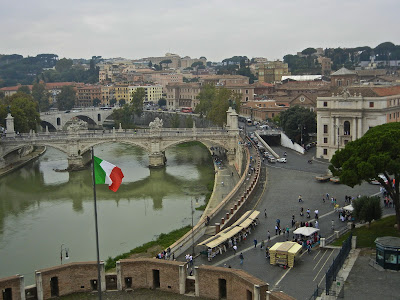 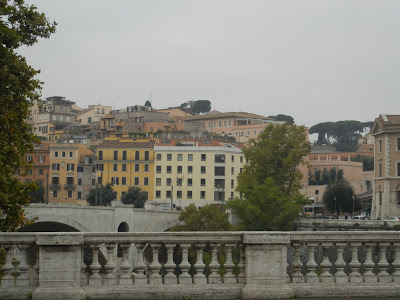 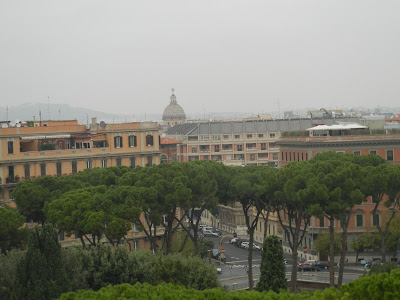 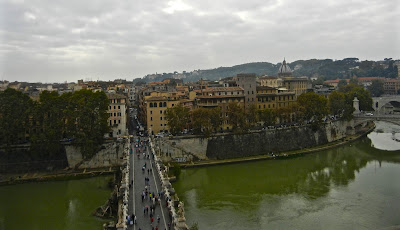 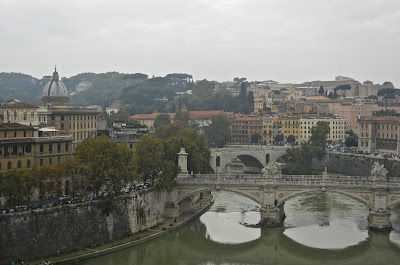 After we walked pretty much to the other side of the tower, I was scrolling through my pictures and I realized that I didn't like the picture of me that I got with my favorite view. Some guy's arm was in it, and my hair looked bad. So I was a bad friend and made Olimpia walk back around to the other side of the tower to take this picture. Poor Olimpia. Good thing she likes me. 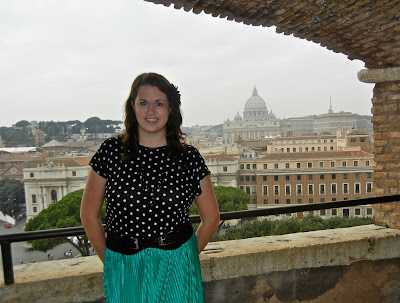 I'm satisfied with the result, though. Nice work, Olimpia! 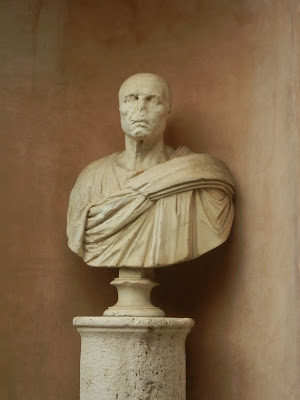 Someone needs to look into this. Why would the Vatican be displaying Voldemort? Concerning.

We had to hurry out of Castel Sant'Angelo because we had a noon appointment with the Pope. We enjoyed our time at the Vatican on Friday so much that we had decided to come back on Sunday to get blessed by the Pope. Why not, right? He blesses the crowd in St. Peter's Square every Sunday at an outdoor mass.

Castel Sant'Angelo is right down the road from St. Peter's, so right away when we started walking in that direction we were in a big crowd of people. Pope Francis was giving (doing? saying? -what's the correct Catholic-y term here?) a mass. It was broadcast on video screens every few hundred yards. We kept creeping our way closer to the square, and eventually we could see (without the video screens) the little open tent where Francis and his cardinal friends were hanging out. 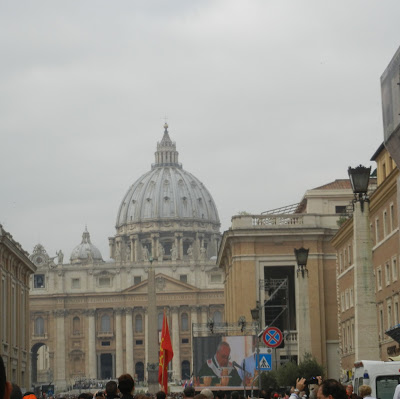 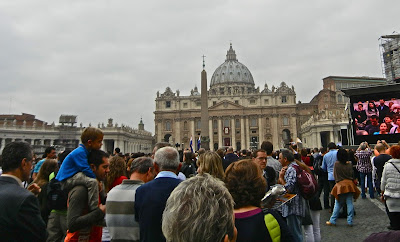 Eventually some priests who were in the tent with the pope came down the line to give people communion. 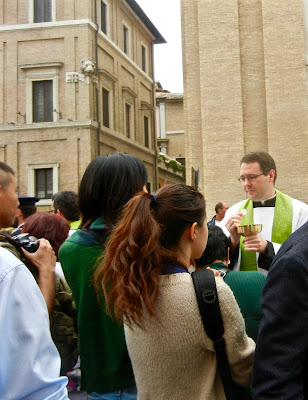 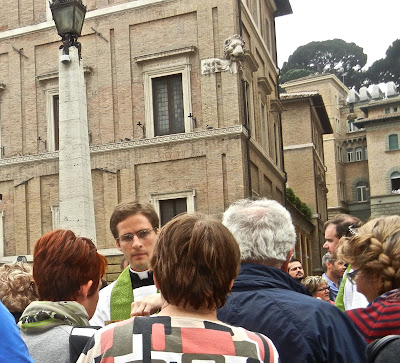 My favorite part was the singing! It sounds soooooo cool when so many thousands of people are singing in Latin together. It also kind of reminded me of the Western Wall in that everyone is so happy to be there. It was fun.

So after that adventure, we made an attempt to find Mormon church but were unsuccessful. Instead we braved the crowds around the Vatican for some souvenir shopping, and then we ventured out later to see the Basilica di San Giovanni. Jenna recommended this church as one of her favorites in Rome. 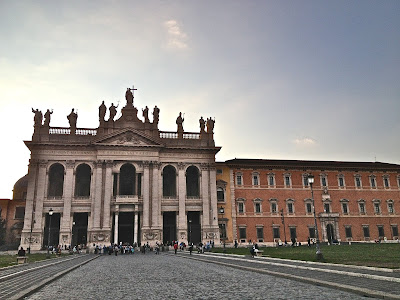 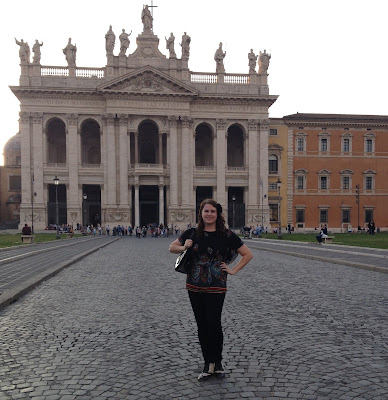 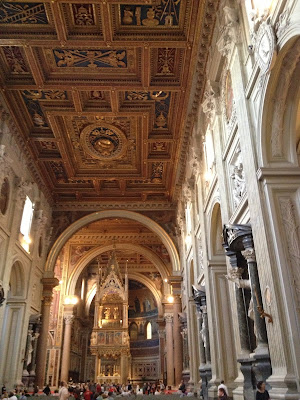 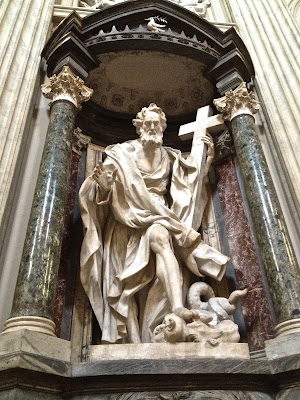 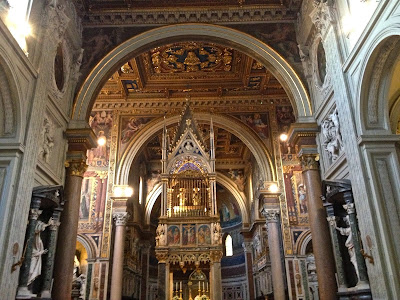 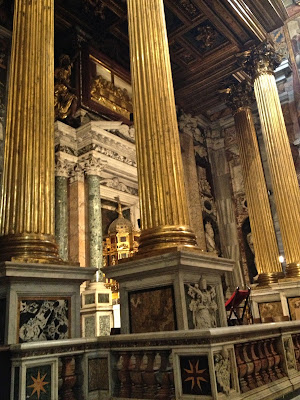 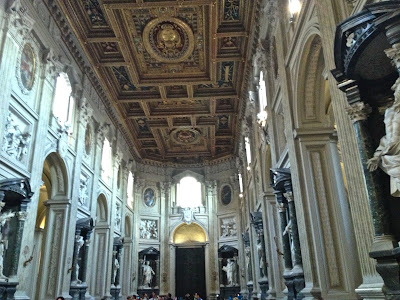 The amount of gold was very satisfying to me. Definitely worth the visit!

Right next to the basilica are the 'Scala Santa,' a staircase brought to Rome from Jerusalem. Legend says that it's the staircase that Jesus walked up at Pontius Pilate's house. The tradition is to climb it on your knees while you repent. We considered doing it, but that idea went out the window once we laid eyes on it.

By this point, it was dinner time! We headed to the Trevi Fountain area because we really liked it there. I had my second dish of Italian pasta: fettuccine alfredo. Allow me to quote Jenna in order to describe my pasta: "Now I understand why everyone always makes fun of Olive Garden."

Of course, then we needed gelato to cleanse the palette. I believe this was only our second gelato? We ate it sitting in front of the fountain. Gelato is delicious, but I've got to say that custard is way better. Gelato is better than ice cream, but custard is better than gelato. There's some more food wisdom that me and Jenna came up with.

Here's the Trevi Fountain at night! An end to another great day. 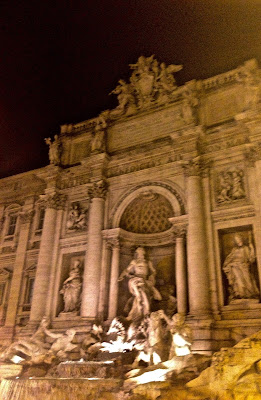