So I live in a pretty cool city, which means that sometimes (okay, usually) my everyday life is pretty cool. When I get bored, I just wander around the city. Sometimes I have a destination in mind, but a lot of times I just like to go on walks and see more of Strasbourg.

This is the church that’s on my street, St. Pierre le Vieux. It’s right next to my grocery store, and I walk by it to get to the train station every day. I also love hearing the bells from this church all the time! Church bells are one of the things that I’ll miss the most when I come home from Europe. 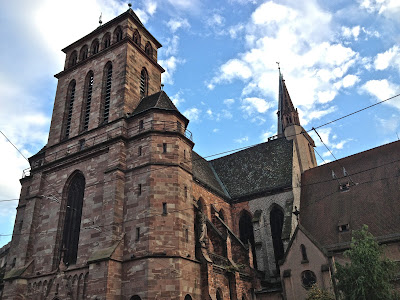 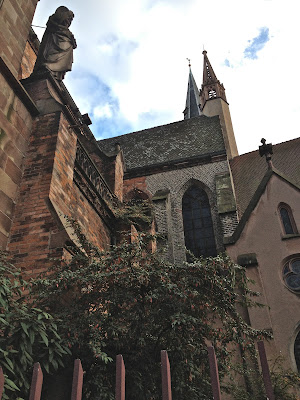 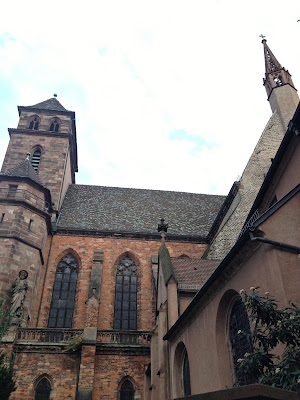 Speaking of churches, on one of my random walks I stopped inside this one. It’s called the Temple Neuf. This church is right off of Strasbourg’s Place Kléber, the main square of the city. 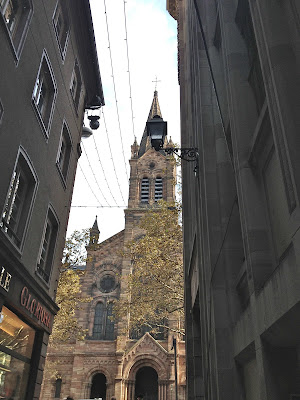 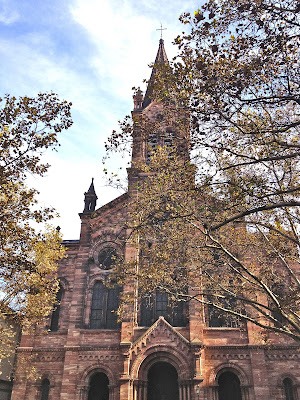 On that same walk, I decided to stop by my favorite place, Strasbourg’s cathedral. Usually at night there aren’t a lot of people at the cathedral, but this time I saw tons of people going in. Then I saw men wearing medieval costumes and holding trumpets going inside. The obvious choice was to follow them.

I was slightly concerned that I was crashing an important wedding or some other private ceremony, but at the door I was handed a program and it looked like it was just a special mass.

I’m still not entirely clear on the reason for the mass and why so many people were there, but it had something to do with an organization that shoots wolves?  There’s a group of men called the ‘lieutenants de louveterie,’ who are apparently part of a wolf-hunting guild established by Charlemagne that are still going strong. If anyone can explain that one to me...like as to what wolf hunting has to do with mass?...then you get a prize.

If anyone would like some trumpet background music while you read the rest of this post, I found a youtube clip of this same ceremony last year: http://www.youtube.com/watch?v=1FUizlHgOwk

A few minutes after I got there, every seat in the cathedral was filled. And that is a big cathedral. By the time the mass started, it was standing room only, and hundreds of people were standing on the sides. My seat was towards the front, so there were a ton of other people behind me too.

I’ve been to a few other masses, but I’ve never seen one where so many people attended (the party outside in St. Peter’s square aside...). I’ve also never been to a mass with a choir, so that sounded awesome. And not to mention the medieval trumpet players! 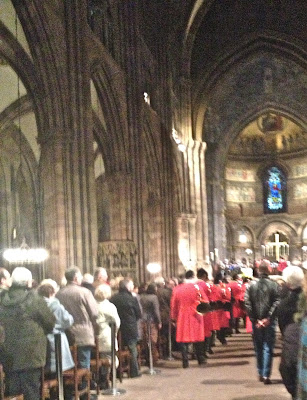 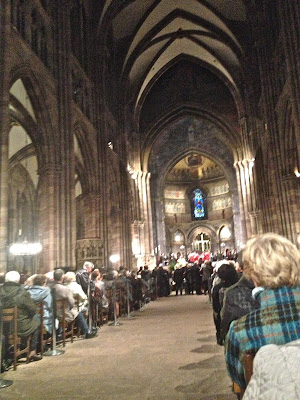 It already feels like you’re stepping back in time when you go into the cathedral, but hearing the singing and music and being surrounded by so many people made it even cooler. I’m glad I stumbled upon this and got to party with the wolf hunting guys.

The next weekend, I decided to visit Strasbourg’s palace, the Palais de Rohan. I can’t believe it took me two months to make it to the palace. Me and palaces get along really well together. There are actually three museums inside the palace, but on this day I only went to the section where you can see what the actual palace rooms look like. 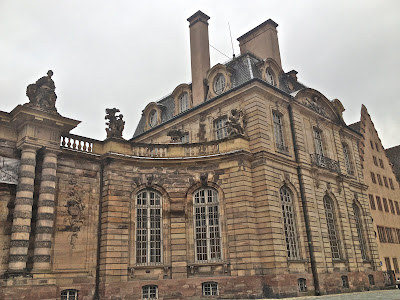 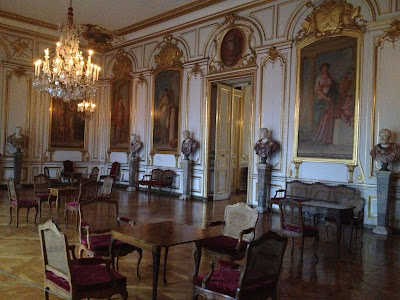 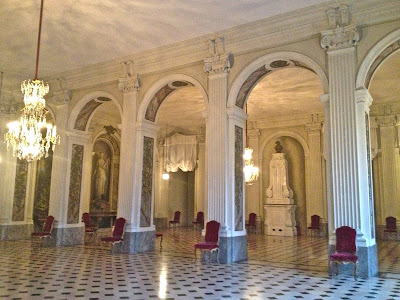 One of my favorite people in the world, Marie Antoinette, slept in this room on her first night in France. Since Strasbourg is right on the German border, she stopped here overnight on her way to Versailles. 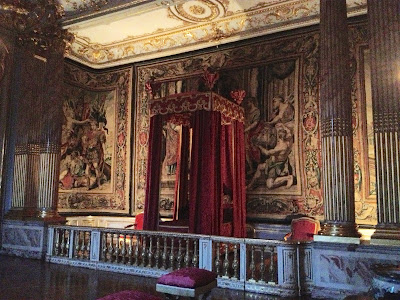 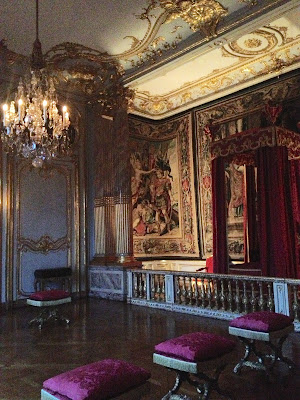 The part of the palace that's available to tour is pretty small, but it was definitely worth seeing.

I also discovered that the palace courtyard is a good place to take pictures of the cathedral. You can actually see the top! That's always a challenge because it's so tall. 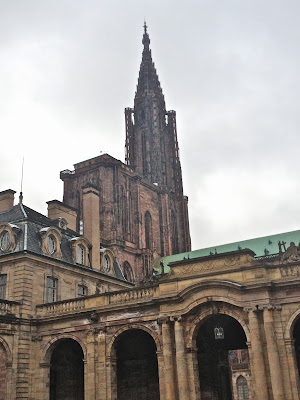 That segues into this picture... I couldn't quite get the top of the spire in the frame with this cute carrousel.

The day after my Palais de Rohan fun, I did some more quality Strasbourg wandering.

Since I live on an island, there are always more river views to take pictures of. 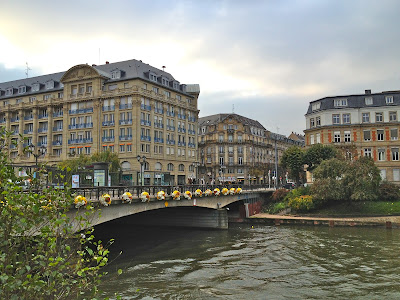 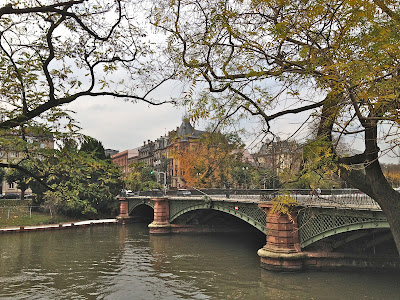 Kind of by accident, I discovered Place Broglie, one of the main plazas of Strasbourg. This is where the official government buildings are found, hence all of the flags. Compared to America, you rarely see flags on display in France. Discovering this area was a surprise. It was beautiful with the fall leaves! 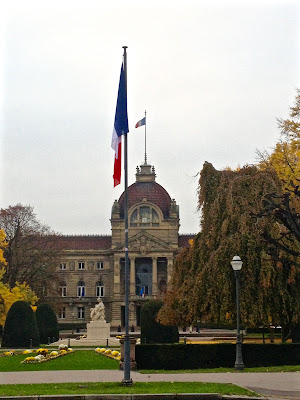 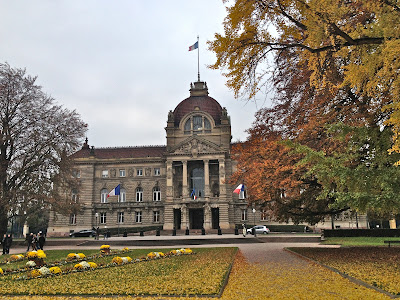 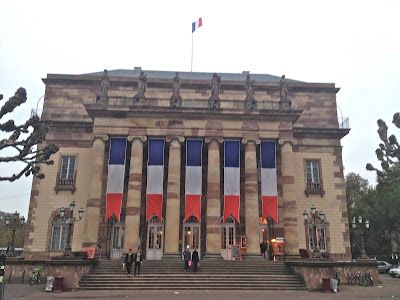 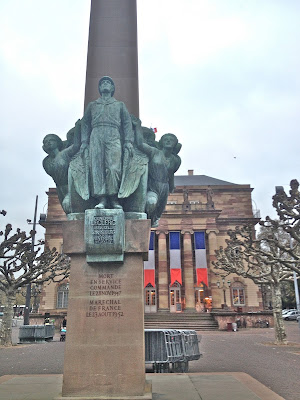 I loved this view of the cathedral from Place Broglie. 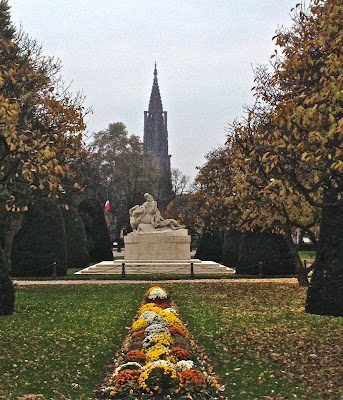 That concludes the summary of my recent wanderings around my city. My next post will be all about tracking down Christmas decorations as they’re put up in Strasbourg.