One of the nice things about our Galilee trip was that during the first week we had a free day every other day.

Day 3 in Galilee was spent swimming in the sea, and then relaxing and enjoying the air-conditioning inside for the rest of the day. It’s been a hot summer in Jerusalem, but it was HOT in Galilee. Most days it was in the mid-90s with horrible humidity. We were way below sea level, which made it hotter.

Day 4 was another field trip day, but thankfully only a short one. We went to Gamla, remains of yet another ancient city. It was possibly the ‘city on a hill’ that Jesus talked about. The city was built on a really steep hill that would have been visible from the Mount of Beatitudes. I had been mentally preparing myself for this day, because it was a long hike that we had been warned about. I don’t like the word hike, especially when it’s mentioned in conjunction with the phrase “100 degrees”.

Before we got off the bus, our professor said that the hike was optional. My day was made. Nothing we do on field trips is ever optional! Everyone probably thought I was weird because I was the only one that didn’t go, but I stand by that decision (especially when I saw how sweaty everyone was afterwards). I still had an awesome view from the top of the hike.

We were in the Golan Heights region. The Golan Heights used to be part of Syria before the 1967 war when Israel occupied this area. It is a mountainous region, and Syria used to use the advantage of having the high ground to shoot rockets into Israel. So we were very close to the Syrian border on this field trip! Exciting.

Anyways, while everyone else in my class was hiking, I took the opportunity to take dance selfies. Worth it. 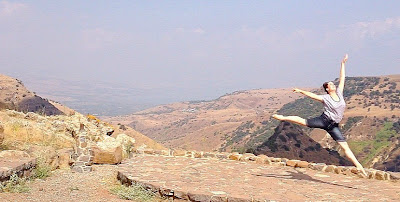 Isn’t that an awesome view? The dark brown hill under my right foot in the first picture is where my class went. They had to go down into the valley and then up the hill.

Our only other stop on this field trip was Kursi. In Kursi, there are remains (yay) of a Byzantine church that commemorated Jesus casting the evil spirits into the swine. Our professor referred to it as “Piggy Hill.”

At night on Day 4, half of our group went out to dinner and then to the boardwalk in Tiberias to get ice cream. Tiberias is the biggest city that was close by. I had a Bueno bar-flavored milkshake. It was a success.

Here’s someone fishing on the Sea of Galilee in Tiberias. 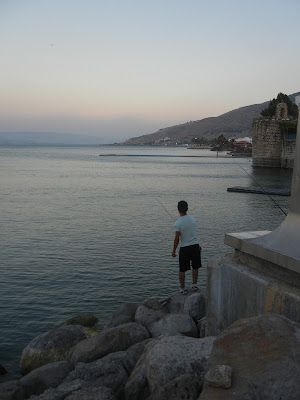