I met David more than 2 years ago in France. Don't you worry if you want more details about that... the whole story will be coming up soon. Read about the first day we met here.

Anyways, it's been an interesting road since then. I don't think our relationship would have been possible without a few things- modern technology that allowed texting and video chatting internationally, me living in Israel (only having a 1 hour time difference let us talk a lot more, and the fact that flights from Israel to France are pretty cheap), and lastly, my dad and Uncle John arranging an internship for David here in WI.

For a while, David has kind of been waiting for my go ahead to get engaged. Because of that, and because he is incapable of lying (especially to me), I knew it was coming. That's what I wanted though- I'm weird and I'm not a fan of surprises. I'm the kind of person that reads the end of books first and looks up how movies end before I see them.

We went earlier this week to look at some rings. I officially chose one the next day and let him know. A few days later, I prepared by getting a manicure and then we went on a little road trip to Madison. 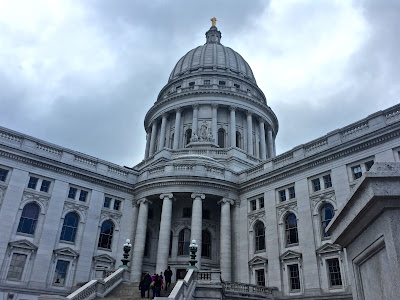 One of the memorable parts of the day was the crazy weather. I mean, it's April in Wisconsin... so of course there was a windchill and it was snowing. We can always say we got engaged during a lovely spring blizzard. 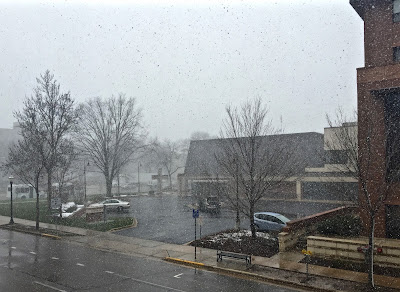 We had been to the capitol building once before- when David first came to WI in 2014, and we were still getting to know each other. For fun, here's this... 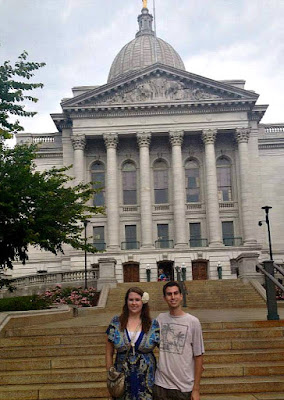 We couldn't have predicted then what we would do the next time we came to that building. We weren't even 'officially' dating yet back then.

Even though I chose the ring and sort of when we would do it (haha), David chose the proposal location and he did a good job. It suited us. It was very American for him, and a grand, beautiful building for me. Also, I really love my home state of Wisconsin, so what could be better? We walked around a little when we got inside and looked around, and then found a more secluded spot that had this view: 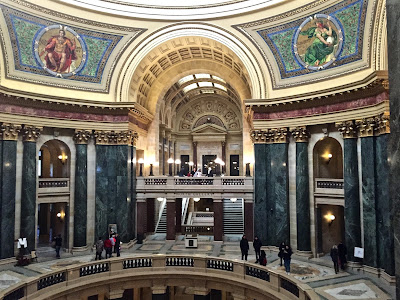 David got down on one knee and proposed en français. I don't really remember exactly what he said because there was a lot going on in my head, but I said "oui," and then we were engaged. We took a few more pictures and then headed back into the cold, stopped for lunch, and started the drive back to Germantown. 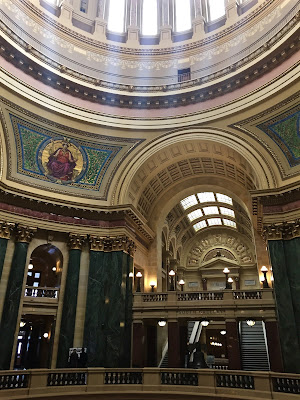 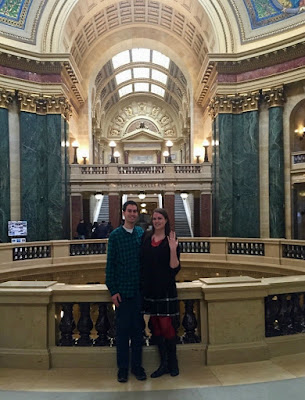 Can we talk more about my ring? I love it even more than I thought I would. It was one of my top picks from browsing online, and I tried it on once in the store... but wearing it in my real everyday life it's even more beautiful and sparkly. My mom was laughing at me yesterday because she kept catching me looking at it. MERCI David. 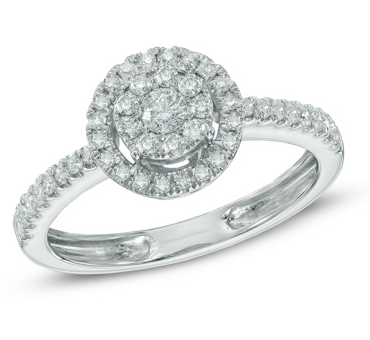 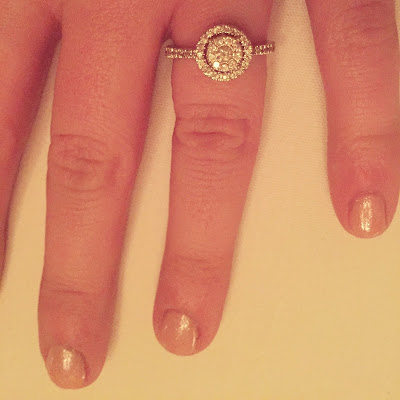 I called Jenna in the car on the way home, and then I was very excited to tell my parents! It was one of my goals to completely surprise them. I guess even if I don't like surprises myself, I like surprising other people. I requested that David not ask my dad beforehand for this reason. I'm not really a fan of that tradition anyway, and I wanted to be there when my parents found out. Also, I was already 100% sure that my parents love David and wanted this to happen.

We were a little sneaky when we got home. I hid the ring in my purse, and we just came in and sat down like normal. Me and my mom went jewelry shopping in Cedarburg yesterday, so I told my parents that I got some new jewelry again today (knowing me, a very plausible story). I pulled out the ring. At first they didn't seem to believe us because they really weren't expecting it, and it was close to April Fool's Day.

When they caught on that it was real, there was lots of happiness and hugs. One of my favorite parts of the day! Even though it was getting really late in France, David was also able to get ahold of his parents and tell them the news. It was fun to hear their reactions too.

After that, there's not much more to tell. I told a few close friends and my grandparents. Then we went out with my parents for a celebratory dinner. They treated us to an amazing dinner at a fancy (French) restaurant, Lake Park Bistro. Yes, we actually got David to go to a French restaurant. He didn't even run away when the cheese came out. 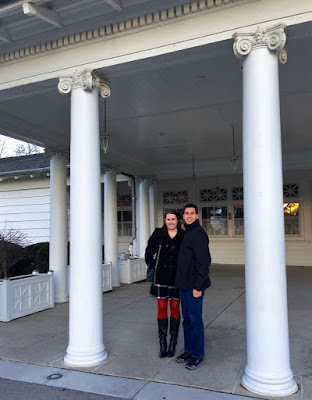 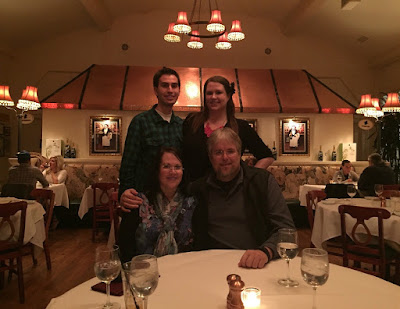 Our waiter was nice and brought us free champagne when he heard the news. We didn't drink it, but there's nothing that says we couldn't pose with it ;) 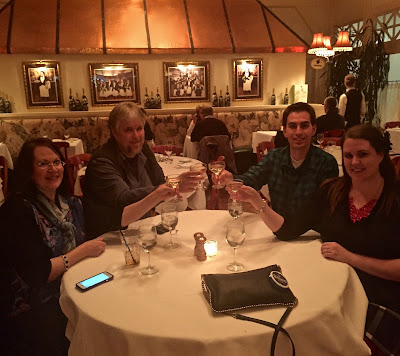 Before dinner was over, I couldn't wait to share the news on facebook any longer. The rest is history!

We're all very happy and excited. There are complicated immigration issues we need to work out, so we don't really have a clear idea yet of when the wedding can happen. We'll keep everyone updated when we know more. When it does happen, the tentative plan is to do it in the Nauvoo temple with a reception in WI.