My last weekend at the JC was pretty great. It started on Friday, with me FINISHING COLLEGE FOREVER! I turned in my last final on that Friday afternoon, and it felt so good to be free!

Friday was also a special day because it was Marissa Day! And no, that's not something I came up with and forced people to celebrate. We got the idea from one of our good friends Lauren and her roommates. On each other's birthdays they wore each other's clothes and dressed up like the birthday girl.

My roommates Ashleigh and Kelby thought it would be especially funny if our apartment did this, because I have quite the distinctive style. So the night before, I chose their outfits and accessories with glee. Neither of them are girly girls. Kelby enjoys things like hiking and camping. Ashleigh's favorite pastime is shooting animals, and she once killed a bear. I don't even go outside.

I decided that Ashleigh had to wear pink, because one time I accidentally thought she was wearing pink but she thought it was peach/orange. She was so offended that I thought she would wear pink that she mimed throwing up. So a pink sparkly shirt was an obvious choice for Ashleigh. I'm such a compassionate roommate!

Kelby has longer hair, so she obviously had to wear an obnoxiously high ballerina bun, which is my hairstyle of choice. And all 3 of us wore pearl necklaces and hair flowers.

The beautiful result! Taken from our balcony: 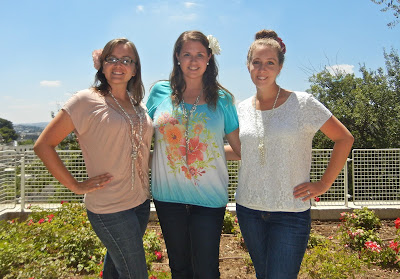 People kept doing double takes all day, especially since Kelby was wearing my signature hairstyle. I swear that once even I did a double take, and I thought was looking in a mirror instead of looking at Kelby. I'm just not used to people dressing like me.

After finals on Friday, I went out to the city with my roommates and some other friends. We wandered around a little and listened to some of a concert outside, ate falafel for dinner, and then met up with the other BYU students at the Western Wall for the beginning of Shabbat.

With the roommates hanging out at Jaffa Gate, one of the entrances to the Old City: 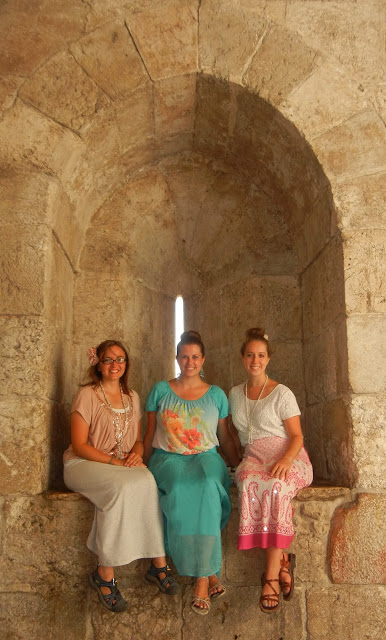 Most people dress up to go to the Western Wall for Shabbat; hence the outfit change. Before heading down to the Wall, we spent some time people watching in the Jewish Quarter. It's fun to see everyone in their cute Sabbath clothes. Stay tuned for my excellent stalker pictures in a later post.

Going to the Western Wall on Friday night is one of my all-time favorite things to do in Jerusalem. We came here on our first weekend too. It's definitely to BEST way to be immersed in Jewish culture in Israel :).  It's a huge party. People sing, dance, and pray, and it's always packed with people.

Here's the crowd starting to gather before sunset. 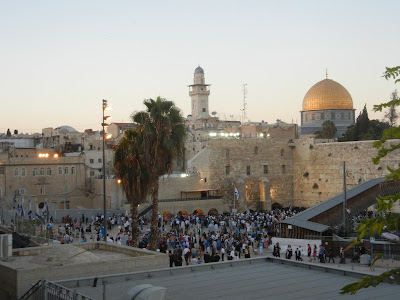 The special excitement this time at the Wall was that I heard a rumor that Jerry Seinfeld was there. I was standing right next to this lady on the women's side when her husband leaned over the barrier and was telling her that he had just seen Jerry. He was talking about how funny it was that none of the ultra-Orthodox Jews knew who he was because they don't watch TV. Obviously, the rest of the time we were there me and Kelby were on a quest to find Jerry. We couldn't go over to the men's side, so we assigned some BYU guys to search for him. We stood by the exit of the men's side to scour the crowd. There were a couple thousand people there, so it's pretty hard to spot anyone. Plus, strangely enough, there are a lot of Jewish guys there that have more than a slight resemblance to Jerry. By the time we left, pretty much every BYU student was searching for Jerry. Just because I heard one guy talking about him. Haha.

Sadly, we never found Jerry. That would have been the perfect cherry on top of my Jerusalem experience. I was never able to verify that he was in Israel, but I did find online that he's been to Jerusalem a couple times in the last few years. So you never know :)

On Saturday I had to say goodbye to my little Sunbeams. I had a fun summer teaching the Sunbeams (3 year old) class at church. Our class started out with 4 kids, but then some of the American families that work in Jerusalem went home for summer. For 2 months, we just had Abby, our history professor's daughter in our class. I love her! 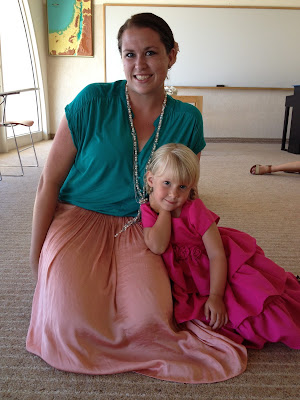 On this last Saturday, we got to see Lydia again too! Her family came back to Jerusalem after a summer in the U.S. Her and Abby were both big fans of my shoes :) 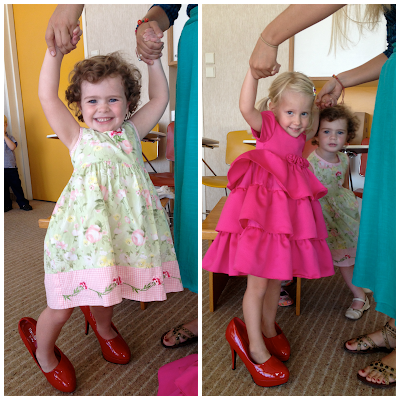 The fun continued on our last free day, Sunday. I went out with some of my favorite people, and we had a perfect day. We went to Dome of the Rock and the Western Wall again (to take more pictures). It was a little exciting at Dome of the Rock because the Muslim modesty police told me that my arms weren't covered enough. Good thing I happened to have a sweater (for a later activity we did that day). That felt great in 90 degree weather! At least my good buddy Kelby was also dressed in a scandalous cap-sleeved ensemble. We got to be shameful American tramps together.

Then we finished up our souvenir shopping in the Old City, and hung out in the Jewish Quarter. One thing we stumbled upon while we wandered was ruins of a synagogue destroyed during the 1948 war. Cool! 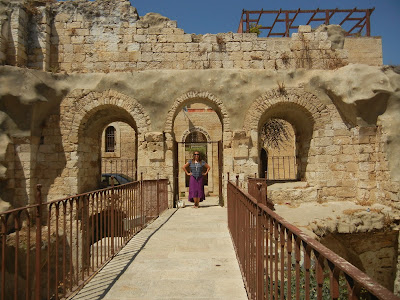 After that, we headed to a church that we hadn't been to yet to see a mass. I'm so glad we did! It was an absolutely gorgeous church. It was by far my favorite one that I've seen in the Holy Land. And do you know how many churches I've seen this summer? It was also really interesting to listen to mass in Arabic. 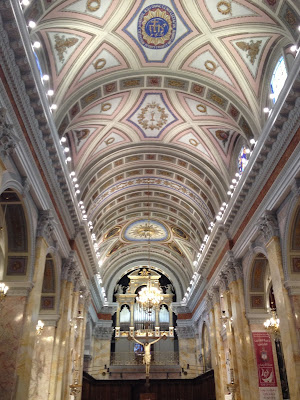 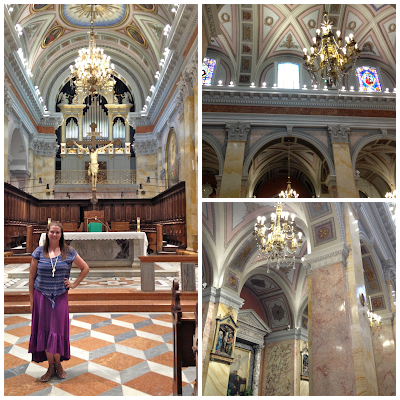 By this time, we had a ton of heavy bags from souvenir shopping. Luckily our friend Nathan had a ride back to the Jerusalem Center, and he took our bags for us. So we were free! Then it was a girl's night.

Something I'd been wanting to do all summer was walk through Mea Shearim, which is the main ultra-Orthodox neighborhood. I'm so fascinated by them! They have signs at the entrance to the neighborhood with modesty standards posted, so we brought sweaters to comply with the rules. Darn. Second time that day that I wasn't dressed modestly enough. Walking through Mea Shearim was super interesting. My favorite part was that all of the little girls wore matching dresses with their sisters. They also all wore 2 braids tied with ribbons at the end. My other favorite part was that there were lots of stores selling framed portraits of each community's rabbi.

After that trip back to 18th century Poland...we went out to an Italian restaurant for dinner. It was delicious. I didn't get a lot of pasta this summer.

As we wandered back home to the Jerusalem Center, I got to check something major off of my Jerusalem bucket list. A picture with Israeli soldiers! I'm so happy I got one. I'd been admiring them all summer, haha.

Let's refer back to this picture: 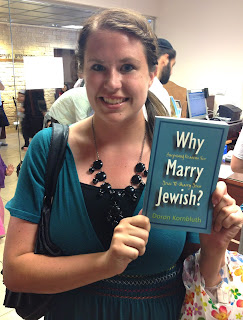 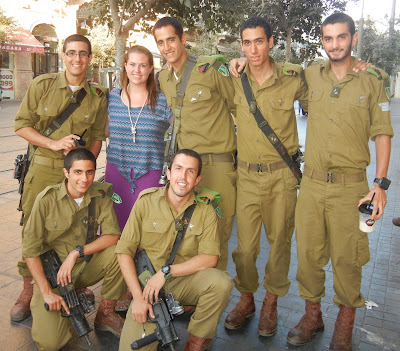 I'd been too shy to ask anyone for a picture, but Ashleigh helped me out (she has killed a bear, after all...that qualifies you to do other intimidating things).

I'm so satisfied with this picture. Mission accomplished!